As much as I love apples in desserts or as a snack, it feels especially rewarding when you can make a whole main dish revolve around apples. That’s the case in this classic Pennsylvania Dutch dish, Schnitz-un-Gnepp, also known as Schnitz-Un-Knepp, or apples and dumplings. Dried apples (or schnitz, pronounced snitz) are one of the main ingredients.

However, as William Woys Weaver points out in As American as Shoofly Pie, this dish “is as varied as the imagination,” and there is both a savory version and a sweet dessert version that leaves out the meat. In my version, wanting something I could serve for dinner, I did opt for the meat.

For this recipe, I dried the apples at home, in my oven, but you can also pick up a bag of sweet dried apples in the farm market at Weaver’s Orchard. I enjoy drying apples because I also love the smell of dried fruit filling my home. I also love it because cutting the apples into circles and seeing the star patterns appear in the center of the apple ring reminds me of childhood, when we would turn dried apples into Christmas ornaments. (Just be sure to cut away the star pattern in the middle because the part that encloses the seeds can be a little “sharp” even when dried and simmered – not a pleasant texture!)

If you happen to make a lot of schnitz at home, you might enjoy another classic Pennsylvania recipe that uses it: Amish half-moon pies.

New to making schnitz un knepp? Watch as it’s being made here and you’ll pick up some pointers: 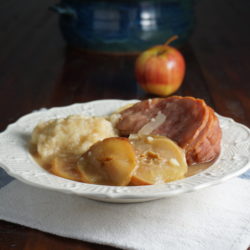