By Rebecca Talbot on January 31, 2018 in Agricultural History, Apples, Recipes

Whoa?! Where did you get that? A museum?

That’s the kind of reaction I get when I pull out my cell phone. It’s a heavy black Samsung flip phone, probably designed for people who are not in their 30s like I am.

Such technological backwardness requires explanations. Usually I say I like my flip phone because I’m addicted to checking email, so I’d rather avoid temptation and carry a phone that doesn’t even make it possible to see what’s in my inbox.

But maybe another explanation is that I grew up in Amish Country. Because of that, opting out of some technology seems like a reasonable way to live. Growing up around people who traveled long distances by horse, buggy or bike reminded me to be deliberate about how I lived my life, how much I owned, and which technologies I adopted. Compared to giving up electricity and running water, choosing an app-less phone hardly inconveniences me at all.

Perhaps part of the constant allure of the Amish is the questions their witness of simplicity makes us ask about our own lives. Could I live like they do? What do I sacrifice to maintain my modern lifestyle? What do I really value?

Whether drawn by these questions, by sheer curiosity, or by the fresh, hearty food, tourists have been flocking to Lancaster County since at least the early 1900s. How do we know? Because we know that in 1913, Isaac Steinfeldt began to sell postcards of the Amish in his tobacco shop and newsstand in the city of Lancaster, and circulated them among other local shops.

But it wasn’t until the 1930s that Lancaster County tourism began to boom.  In the early 1930s, intrigued by mentions of Pennsylvania Dutch furniture in home and garden magazines, people first began to visit the region in search of home decor. (It must have been the “shiplap” of the day.) Around this time, cookbooks began to rebrand Pennsylvania German recipes as “Amish.”

In 1936, children began to read Henner’s Lydia, an illustrated story peopled with Amish characters and punctuated by sighs for simpler times. Its “illustrations underscored a rustic, rural life that Americans saw vanishing,” writes David Weaver-Zercher in The Amish in the American Imagination.

After a highly publicized debate over the schooling of Amish children brought the Amish into the national spotlight in 1937, more people than ever became curious about their way of life. A series of books and pamphlets explaining the Amish to outsiders began to appear. One was a self-published 32-page pamphlet called “Little Known Facts About the Amish and Mennonites“– many of the facts “little known” because they were based on hearsay rather than truth. 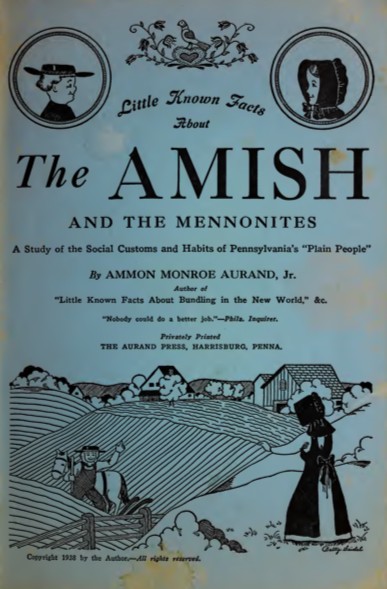 After World War II, an increasing number of families owned cars, which made road trips to Lancaster (via the shiny new Pennsylvania Turnpike!) more convenient. At the time, no one had built any “tourist attractions” in the county. Daniel Weaver-Zercher recounts how tourists would simply go to an actual farm and talk with the farmers!

Tourism only increased after 1955, when Joseph Stein (best known for writing Fiddler on the Roof) wrote the musical Plain and Fancy, putting Amish characters on Broadway. By 1963, Lancaster County saw 1.5 million tourists per year. Today, over eight million visitors come to the county annually.

Over the years since Isaac Steinfeldt first published his Amish postcards, food has been one of the attractions of the region–whether it’s shoofly pie, whoopie pies or a refreshing glass of fresh-pressed apple cider.

So I wasn’t surprised to find references to food in that tourist pamphlet from the 1930s, “Little Known Facts About the Amish and Mennonites.” The most intriguing was the reference to moon pies (or half-moon pies):

Those attending the [church] meetings are fed on ‘moon pies.’  The lower crust is rolled out to the usual pie-plate size, and the uncovered part of the crust laid up over the ‘contents.’ The provides a secure “pocket” for the contents….

Since so much of this book is made up, I wanted to be sure that these Amish half-moon pies weren’t a figment of the author’s imagination. William Woys Weaver’s authoritative food history As American as Shoofly Pie includes a recipe for half-moon pies filled with sauerkraut, which sounds delicious. So yes, they’re authentic!

But I was in the mood for something sweeter. So I went with a “schnitz” filling for my Amish half-moon pies instead. The filling tastes like an incredibly flavorful apple butter. Here’s my recipe. 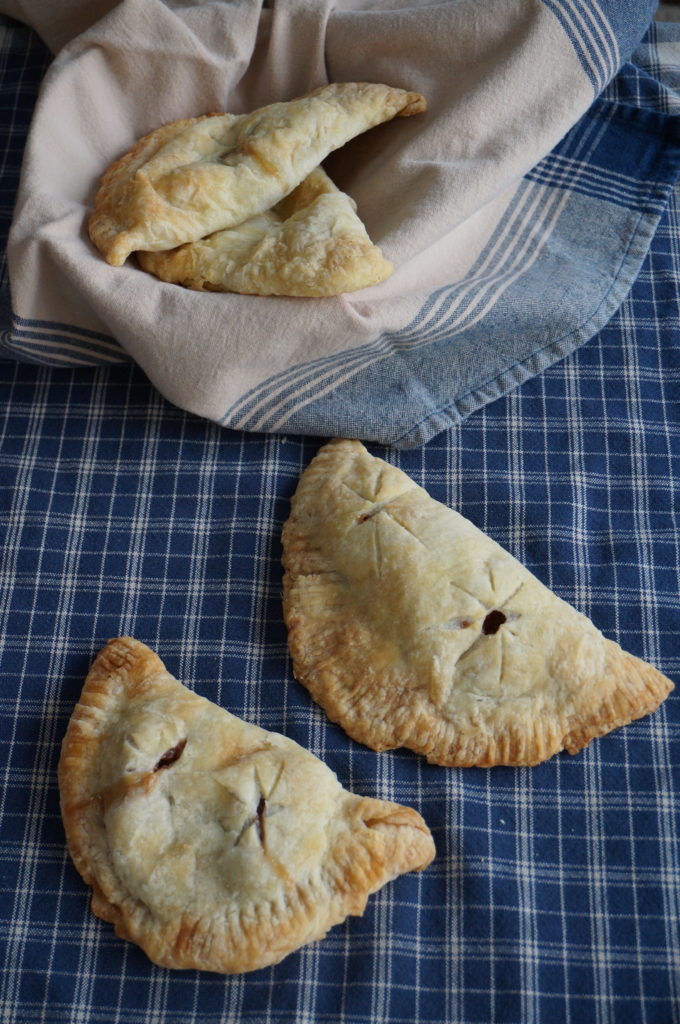 Amish Half Moon Pie Author: Weaver’s Orchard Begin this the night before by soaking the dried apples in water. You can make the schnitz filling a day ahead, too, if you want to since it needs to cool anyway.