I began working with Don and Pam Gable of Conebella Farm in January 2014, and immediately, I knew it was going to be good.  My sister, Rachel Van Duzer, heads up their marketing and had asked me to revamp Conebella’s web site with her.  I still have the first email I sent my sister about it.  “What a great farm!” It said. “I am so excited to promote their work!”

Brandon Hertzler, who cohosted this week’s cooking class with me, has known the Gables much longer.  He worked for Weaver’s Orchard at the Elverson Farmers Market in 2010 and got to know Don and Pam Gable, who co-managed the Elverson Farmers Market and were operating the Conebella Farm Cheese stand there.  “As a person who has agriculture on all sides of their family,” says Brandon, “I respect the Gables so much for their day-in and day-out hard work. They love what they do and are the most genuine people you’ll ever come across.”

I was also becoming more and more impressed the longer I worked with the Gables, the more times I used Conebella Farm’s rich, buttery raw milk cheese in recipes, and the more I talked with Don and Pam about the daily work they do to care for their herd.  Conebella is a working farm, and Don, Pam and their three sons put in long hours milking and feeding the cows, clearing paths for them during snowy winters, and growing and harvesting all the hay and other forages for their herd.

On this farm, hard work, knowledge and dedication go back generations, to Don’s great-grandparents, Joseph and Ella Gable, who purchased the 198-acre farm in 1923.

Their knowledge of the breed has a long history, too, stretching back to 1938, when Don’s grandfather Harold purchased the farm’s first Ayrshires from his brother, John, who managed a herd at a local farm.  Just this month, the Gables won a Master Breeder award for the way they have managed the herd that descended from these first Ayrshires. In the year and a half I’ve known the Gables, they just keep winning awards!  They have won their second and third consecutive Land O’Lakes milk quality awards and even had the country’s top Ayrshire cow.  The farming behind the cheese is as high-quality as the cheese itself.

I had the chance to tour Conebella Farm and meet Pam and Don face-to-face last June, after I’d worked with them for six months.  Why did it take me so long, you ask?  Well, if you live near Elverson, like Brandon does, you can stop by their scenic farm and buy cheese, raw milk, their friend’s yogurt and more at Conebella’s farm store.  But did I mention that I live in Chicago?  I grew up near Geigertown, though, and the next time I was in the area, my sister Rachel and I drove up the Gable’s long driveway and Pam gave us a tour of the farm.  I even got to meet this little one: I am very tempted to keep adding pictures of Ayrshire calves at this point in the article.  I am also very tempted to keep photos of these calves in my wallet and show them to all my friends, but I restrain myself.  If you do want to see more cow and calf photos, visit Conebella’s Facebook page, but let’s move on to recipes.  Brandon and I have three delicious recipes to share with you from this week’s cooking class at Weaver’s Orchard.

My first recipe, a Cajun Cheddar Chicken, uses Conebella Farm Cheese spreads, which are delightfully cheesy since they’re made with a cold-process that never melts the cheeses down, and they contain a lot more actual cheese (vs. cream cheese) than you’d find in a grocery store cheese spread.  On separate occasions, I’ve made this dish with three different kinds of Conebella’s preservative-free spreads: Tomato-Basil, Smokey Cajun and Cheddar.  Since Tomato-Basil and Smokey Cajun Cheddar  are seasonal cheeses, I’ll give you the recipe with the standard Conebella Farm Cheddar Spread and you can adjust the seasonings when you want to use the other two. 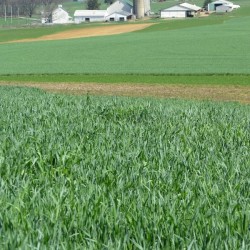 Since this recipe itself is so simple, you can make it more DIY by drying your own tomatoes and making your own Cajun seasonings.  This recipe walks you through the process for oven-dried tomatoes, but you can also scope out your local thrift store in search of food dehydrators.  I just rescued my mom’s before she took it Goodwill. *Note that this recipe has been updated to reflect best practices for drying tomatoes. Do not store tomatoes in oil with raw garlic.

Dehydrating vegetables and fruits requires some advance planning, but Cajun seasoning is easy to make with ingredients that probably already occupy your spice rack.  And then you’ll know the seasoning packet will not be flavored with chemicals!  In attractive packaging, seasonings like this make nice gifts.  A friend of mine gave out an amazing seasoning mix as a wedding favor.  And Conebella Farm Cheese has recipe cards, so you could assemble a nice hostess gift or teacher gift with the recipe card, Conebella Farm Cheese Spread and your own Cajun seasoning mix.

Brandon has been working at Weaver’s Orchard each summer, which, he says, “allows me to chase after three of my favorite things: people, food and plants.  The orchard in general has been one of the greatest blessings in my life because it has given me the chance to work with family and friends and has given me a platform of leadership that has prepared me for many other aspects of my life.”

At Weaver’s he’s been running offsite marketing opportunities, hosting cooking classes, helping with Story Time, and filling in at Pick Your Own.

“Each of these venues has given me a unique look into what it means to be connected to the food we eat. This year I am mainly working with the Cooking Classes and Story Time.  Story Time is a fantastic experience because it has become so well integrated in our community that we have literally hundreds of young kids coming out each week and getting up close and personal with one aspect of how the food they are eating is made.”

Hosting cooking classes, meanwhile, lets Brandon “get a little more serious about food,” learning along with a positive, grateful community that is excited about what each presenter has to say.  Last year, because of a last-minute cancellation, Brandon co-taught a class with my sister Rachel.  “It was amazing to have a chance to actually lead a class and show the people in the audience I actually know what I’m doing.”

During the academic year, Brandon teaches Anatomy and Physiology at Twin Valley High School. “As a teacher I look forward to going back to the orchard each summer because as I say ‘Plants don’t talk back to you, they do what you want them to do!'” Our final recipe used Conebella Farm Sharp Cheddar blocks in a savory crepe recipe.  These crepes are very nice to serve at a special breakfast or brunch because they’re delicious but not as sweet as many breakfast dishes, so they won’t spike everyone’s blood sugar and leave everyone feeling “hangry” later. If crepes sound intimidating, don’t worry. They look fancy, but I find them easier to make than pancakes or waffles, because they’re so thin and it’s easy to tell when they’ve cooked through.

Bechamel sauce inspired by the Joy of Cooking; crepes recipe inspired by Allrecipes.com. This recipe makes 6-8 crepes and about 1 cup of bechamel sauce. The amount of ham, sauteed spinach and mushrooms can be adapted to suit your family’s tastes.