A rarely grown fruit in Pennsylvania, the Cameo apple is a unique autumn harvest gem raised by Weaver’s Orchard.

Initially named Carousel apples, Cameo apples originate from the central part of Washington not far from the Wenatchee River in the Wenatchee Valley within the orchards of the Caudle Family during the 1980s.

Darrel Caudle stumbled across what would eventually be the Cameo apple after he discovered a new tree in his orchards near Red Delicious apples he grew and maintained. Once it finally had fruit, he noticed that it didn’t have the solid coloring of Red Delicious apples but instead hints of vertical slivers of red on a backdrop of a creamy yellow and delicately thin skin. And it carried an altogether different taste, too.

Called a chance seedling today from the nature of its early days, the Cameo apple is believed to be a blend of Red Delicious and Golden Delicious apples. The Cameo Apple Marketing Association based in Washington regulates these tartly sweet food-on-the-go grabs.

Given that Cameo apples are primarily grown in Washington, these incidental apples being a part of Weaver’s Orchard and the supply of apples raised on these stretches of farmland in Berks County are a unique asset available from hometown soil and still on the local level.

Cameo apples manage to resist turning brown once sliced, which makes them great for eating in the moment, sliced up and spanned out on decorative trays when friends and family visit. They also work well in cobblers, pies, quiches, sandwiches and even on pizza.

Like many apples, they brim well with potassium, calcium, iron and vitamins A and C.

This Lost Love Apple Salad recipe works deliciously as a lunch-for-one at work or as a side to share. Add more apples beyond just two and adapt as needed for a larger batch.

It takes on the name of Lost Love because of how surprisingly wonderful it is per bite with tart and savory flavor-ways; the first bite is like rediscovering a lost love but through the senses of taste-memory.

It works best with tart apples, so Granny Smiths are another option for this recipe. 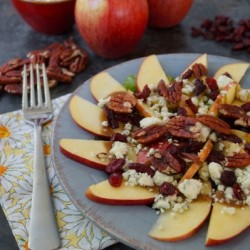