I hadn’t heard of donut peaches until my husband worked for Weaver’s Orchard in 2011. The flat peaches struck me as such a fun novelty–so perfect for kids to hold and snack on–that I figured they were brand new to Weaver’s, and maybe even to the world in general. Much to my surprise, I found out last week that Weaver’s has been growing donut peaches for over 20 years!

To my further surprise, donut peaches aren’t new to the world in general, either. Like all peaches, donut peaches got their start in China, and these flat freestone peaches, also known as “peento” peaches, have been flourishing there for at least the past 200 years. Unfortunately, for many years China was the only place donut peaches could flourish. They were too delicate to grow anywhere else, and even regions of the U.S. known for growing excellent peaches could not support donut peaches at first.

What made them difficult to grow?

They bloom very early, which makes them susceptible to frosts. Because of this, breeders at Rutgers University’s Tree Fruit Research & Extension Center developed a strain of the peach that had frost-resistant buds. They called this peach “Saturn” because it looked like the planet’s rings. 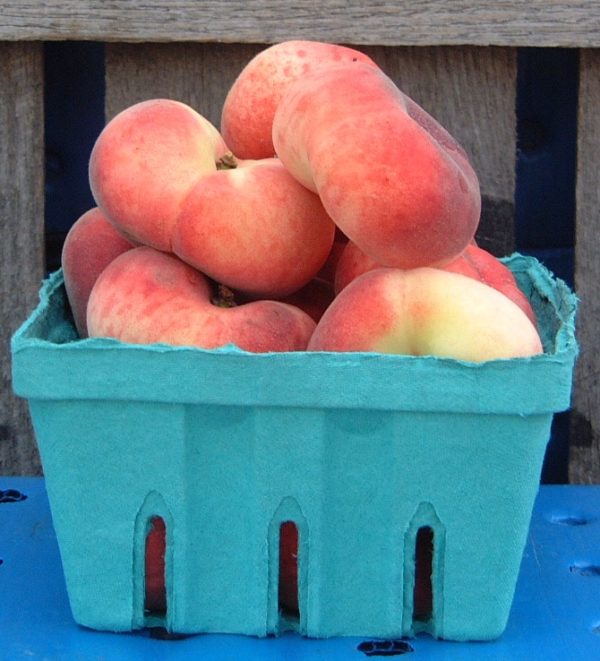 The History of Donut Peaches at Weaver’s

Ed Weaver began to grow donut peaches in the mid-1990s after learning about them at local nursery’s  variety showcase, where farmers have a chance to learn about fruit varieties, taste them, and decide whether they want to grow them at their orchards. Ed found the donut peaches to be very tasty, sweet and juicy, and soon decided to try them at Weaver’s.

In addition to being delicious in their own right, the fruit met another important criteria. They were different from what was currently growing at the orchard. In growing any new crop or variety, Ed thinks about what distinguishes it from what’s already offered. Sometimes if a fruit is on an earlier or later ripening schedule, planting it is a great way to extend the season. For instance, Weaver’s Orchard plants several varieties of apples that are available early–like Lodi and Earligold–and some that ripen later and keep well into the early spring–like Pink Lady®.

What set the donut peach apart? Its shape made it “a convenient piece of fruit for snacking,” says Ed. It’s easy to hold, has very little fuzz and a thin skin, and you can break it in half, pop out the seed, and eat it on the go!

Farmers who grow this novel crop note that it is more time-consuming than caring for a traditional peach tree. All peaches have to be thinned while they are still green “baby” peaches, but since donut peaches produce more fruit, they require even more thinning. (Read Eric Weaver’s account of thinning peaches as a teenager growing up at the orchard.)

The thin skin that makes these flat peaches so easy to eat also presents a challenge for farmers–if the fruit gets too ripe on the tree, it’s easy for the skin to tear, and any tear can be a spot where the fruit starts to decay. The solution is to pick the donut peaches more often, and to harvest them when they are still firm enough that the skin won’t tear.

Though the fruit requires some extra care, it’s a consistent crop, and its convenient “snackable” nature makes it a customer favorite–so much so that Weaver’s cultivates several varieties of donut peaches. In addition to the original Saturn donut peach developed at Rutgers, there’s also a larger white donut peach called Galaxy and some yellow donut peaches called TangOs. Yellow and white donut nectarines are in the works, too.

Check out our new video for more information on this year’s crop of donut peaches!