A Well-Stocked Pantry and the Best of the Season: Desserts, Shrubs + Vinegars with Phoebe Canakis from Deep Focus on Vimeo. After seeing or tasting one of the meals, desserts or beverages Phoebe Canakis of Phoebe’s Pure Food in Lancaster, PA makes, it might come as a surprise to hear her say that she can make dinner in 10 minutes, to listen to her suggest simple alternatives to expensive cooking appliances and to pick up on her frequent phrase, “that’s a nice cheat.” It soon becomes clear that Phoebe, who has a calm, assured presence and a great laugh, believes every cook can whip up food finery, and it doesn’t have to take hours. How does Phoebe whip up a stunning dessert like this quickly? She keeps a well-stocked pantry. At the cooking class, Phoebe advised attendees to start with a plentiful pantry, and then run to your local farm market for fresh ingredients.  She explains, “A well-stocked pantry gives you what you need to make dinner in 10 minutes.”

For savory recipes, vinegar is an essential item in Phoebe’s pantry. “This simple raspberry-herb-infused vinegar recipe will change your life,” she promises. With vinegar, Phoebe makes a Raspberry Lavender Shrub. No, a raspberry lavender shrub isn’t a new way to ornament your lawn! It’s a beverage that originated in colonial days and is now making a comeback. In early America, it offered refreshment for farmers—“like Gatorade,” says Phoebe. A shrub like this one was a way to preserve fruit—an alternative to canning.

Phoebe particularly likes using lavender in recipes, and she shared many other lavender recipes with the class (so if you like lavender, read on!). Lavender is something else Phoebe keeps in her pantry. She cuts the buds off, saves them, and either dries them on a counter or adds fresh buds to sugar, which gives it a light lavender flavor. Here’s how Phoebe makes this refreshing beverage—which can also be used as the base for vinaigrette, or, when combined with a jam, it can be used for basting, or as a glaze on grilled meat or vegetables. “It is SO inexpensive to make vinaigrette,” says Phoebe, so it’s definitely one of those things to make yourself instead of purchasing.

To make the shrub, she recommends a few low-tech, DIY tools: instead of a spice mill, a coffee grinder from Goodwill, and instead of an expensive fruit masher, a sieve with a cheese cloth on top. 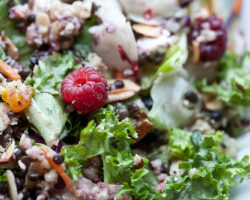 Note: Work with sterilized containers, such as jars prepared in a hot water bath.

Once you’ve made this once, “play with it,” says Phoebe. As long as you keep the vinegar-sugar ratio the same, there are any number of flavors that would work, so she encourages experimentation, starting–if you like– with orange zest and thyme.

After the shrub, it was on to a four ingredient vegan ice cream recipe that only takes half an hour. This is another recipe that invites invention.  Phoebe mentions casually that she has made roasted strawberry rhubarb ice cream. 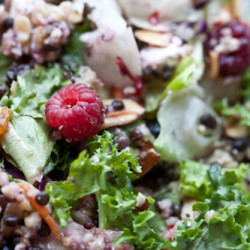 “Chia, like a chia pet?” someone in the audience inquires.

Phoebe notes that to have dinner ready in 10 minutes, cooks can make a double-batch of beans and freeze them. Canned beans can’t be frozen, but beans prepared at home that start with dried beans can be.

And, as with all her recipes, the salad recipe can be modified. Phoebe’s building blocks of a good salad include:

With Phoebe’s calm assurance in their ears, the audience that gathered to listen to and volunteer  in Tuesday’s demo enjoyed what they learned. Gretchen Olszewski of Berks County planned to buy raspberries after the class and make the shrub. She has tasted shrub before, but never tried making it before. Gretchen follows Phoebe on Fig Lancaster’s Instagram. “I have wanted to see Phoebe for a long time,” she says, and the cooking classes at Weaver’s gave her the first nearby opportunity. Commenting on today’s cooking class, she noted, “There’s nothing like it in Berks County.”

With Phoebe’s great recipes in hand, cooks like Gretchen Olszewski can head home with many tips and the basis for plenty of easy meals, flowing from a well-stocked pantry and using the fresh ingredients that are in season.

For more cooking classes like this one, head to Weaver’s Orchard every Tuesday at 11 a.m., now through August 26! 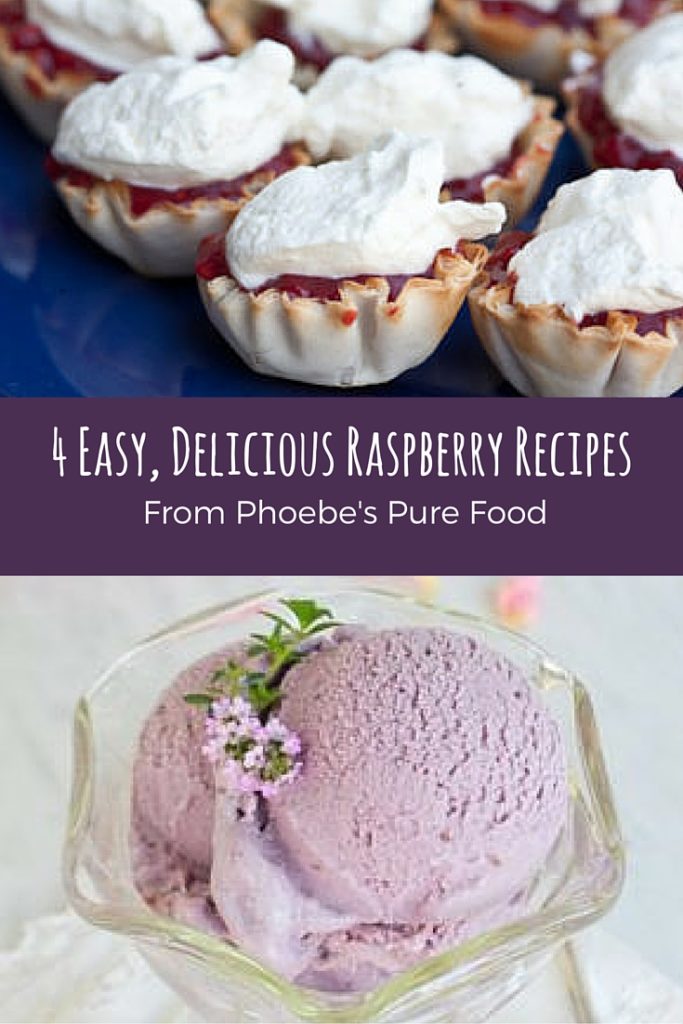