By Rebecca Talbot on November 15, 2017 in Agricultural History, Apples, Recipes

In 1932, Daniel Weaver started Weaver’s Orchard on the same site where I now love to shop and pick fruit. But what was this part of Pennsylvania like before 1932? What is its agricultural history?

The indigenous people who lived in this part of Pennsylvania were members of the Delaware tribe, also known as the Lenape. They grew abundant gardens. According to the Delaware tribe’s website, they planted the traditional staple crops of corns, beans and squash, along with some sunflowers, herbs and tobacco. They grew pumpkins, just as many Pennsylvania orchards do today. The Lenape would cut pumpkins and squash in rings, hang them up on a stick, and dry them in the sun so they could be stored and then re-hydrated later in soups and other dishes.

William Penn strove to treat this peaceful tribe fairly; however, his sons and agents did not follow his example and were known for dishonest land deals. As Europeans settled in Pennsylvania, the Lenape were pushed west and their tribal headquarters are now in Kansas and Oklahoma.

After Penn’s sons founded Reading in 1748, many European settlers started farms in pockets surrounding the newly established city. In Berks County, Pennsylvania Germans planted some wheat, like their neighbors in surrounding counties, but they planted more rye because they preferred the taste and they also used rye straw to thatch their roofs. 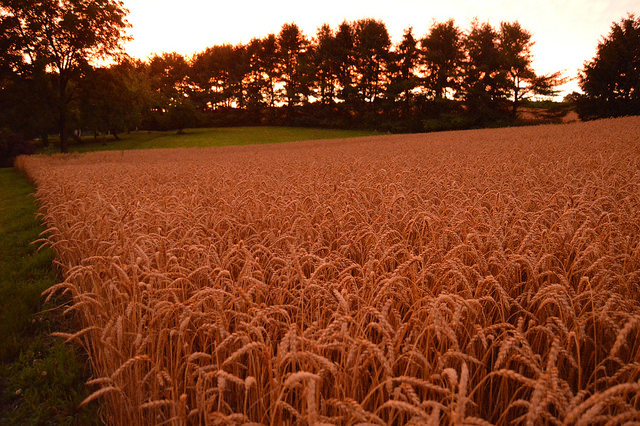 The Pennsylvania colony’s agriculture always included a mixture of crops. “The farm landscape in this period would have been a patchwork of small crop fields, woodlots, orchards and meadows,” says the Pennsylvania Agricultural History Project.

In addition to growing wheat and rye, they also raised animals and grew the feed and bedding for them. They grew other grains (like barley, oats, buckwheat and corn), vegetables (like cabbage, potatoes and turnips) and fruit (usually apples, peaches or cherries). They grew flax and hemp to make into linen and rope. They pressed their fruit into cider. They raised bees.

The thick Pennsylvania woodland had to be cleared for planting, yet the forest was also useful for the farm as farmers tapped their trees for maple syrup, chopped firewood, and gathered berries.

Most farms had a garden and an orchard with apples and other fruit. In Berks County, it was also common to plant fruit trees along roadsides or other boundaries. (When my family moved into our Berks County home in the mid-1990s, it did not have an orchard, but pear trees grew along a fence in front of the house, a nod to a traditional way families grew fruit long ago.) Planting a fruit tree was an act of hope, expressing a desire to stay rooted in one place since, unlike other crops, a fruit tree takes many years to mature.

By the early 1800s, Berks County’s fruit trees–apples, pears, peaches, and cherries– were yielding good crops. By that time, farmers were also growing strawberries and raspberries. But apples were by far the most popular fruit, and women and men worked together both to harvest the apples and to make them into apple butter. Families also ate the apples fresh or made them into schnitz (dried, sliced apples), vinegar and cider.

It is a sad fact of Pennsylvania’s early agricultural history that some farms at the time relied at least in part on the labor of African slaves. In Berks County, there were 290 enslaved people in 1780, according to the book Freedom by Degrees. That year, Pennsylvania passed the United States’ first gradual emancipation bill. It did not free anyone who was currently enslaved, but it decreed that those who were born in 1780 or after would be free when they were twenty-eight years old. The number of slaves slowly decreased in Pennsylvania until, seventy years later, in 1850, there were no longer any slaves in the state. Since then, there has been progress in overcoming racism and human slavery, but the journey is not finished yet. (In terms of human slavery, there are still cases of illegal human trafficking in the agriculture industry, which is another reason to be familiar with the source of your food whenever possible.)

By the end of the 1800s, fewer farms existed in southeastern Pennsylvania. The area had suffered agricultural depressions, and many left farming for opportunities in rapidly expanding cities. However, many farms continued to do well, supported by good growing conditions and local demand for produce.

In the early 1900s, the farms that continued to thrive faced another challenge. Small red spots began to appear on apples, pears and other fruit, as well as on their leaves. This was the first evidence of a tiny insect called the San Jose scale, which infested many orchards throughout Pennsylvania, sucking the juice from all parts of the tree: twigs, foliage, branches and fruit. The San Jose scale devastated many home orchards in Berks County.

In 1933, one year after Daniel Weaver was planting his first fruit trees at Weaver’s Orchard, an agricultural extension agent noted that “the farm orchard of a fraction of an acre or a very few acres, is rapidly passing out.” Many small commercial orchards did manage to hang on, with support from the agricultural extension office, but there was also a need for new orchards to supply fruit. In fact, orchards in the Adams County “fruit belt” got their start around this time because they filled this need.

In the 1940s in Montgomery County, farmers were marketing their produce door-to-door or in booths at Philadelphia markets. Similarly, here in Berks, Daniel Weaver sold fruits and vegetables directly to customers in downtown Reading.

Weaver’s Orchard continued to flourish through the 1950s and 60s, a time when suburban developments started to spring up where farms had once been. At this time, according to the Pennsylvania Agricultural History Project, it started to become a cliché that “the most profitable farm crop was houses.”

The Weaver’s farm continued through the generations, and, like many farms in Berks County, its history is still evident in the farmhouse, old barn, and other structures that remain.

You can read the rest of the Weaver’s Orchard story here, or watch our family history video. For much more on Pennsylvania’s agricultural history, check out the Pennsylvania Agricultural History Project.

For this month’s blog, I decided to try a recipe from history: a traditional Pennsylvania German recipe for apple dumplings. 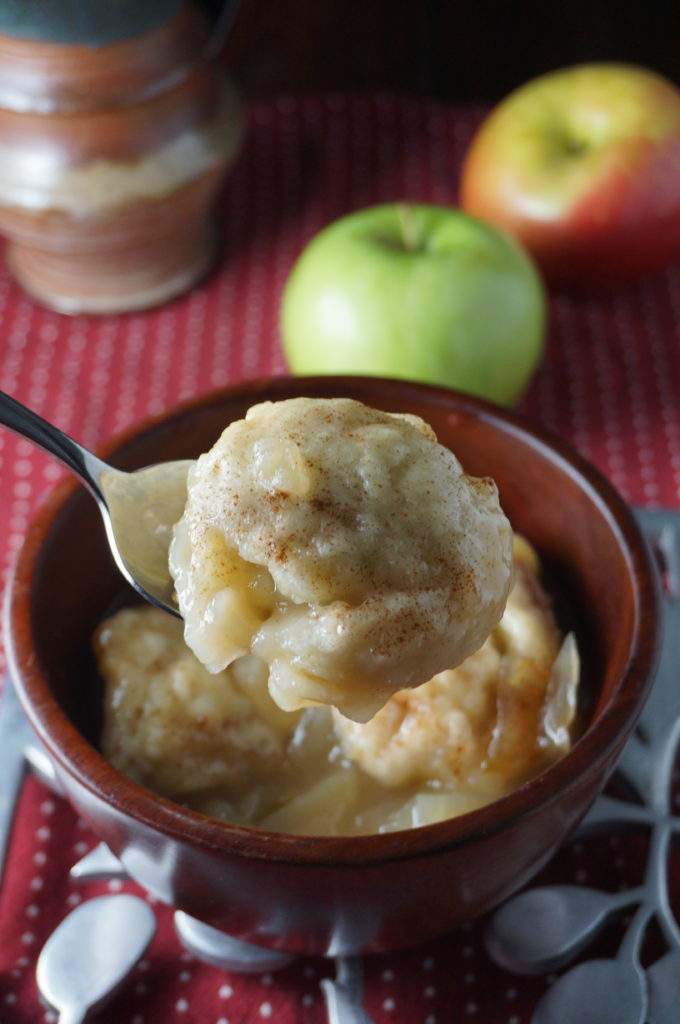 This recipe comes from a cookbook  called “Mary at the Farm,” printed in Norristown, PA in 1915. It’s a fictional story based on the author’s interviews with many Pennsylvania Germans. Many of the recipes were later reprinted in almanacs and magazines.

The cookbook tells the story of 19 year old “Mary” who spends time on the Bucks county farm of her great aunt and uncle. There, her home economics teacher is her great aunt Sarah Landis, “a housewife of the old school [who] still cooked apple butter or “Lodt Varrik,” as the Germans call it; made sauerkraut and hard soap, and baked old-fashioned “German” rye bread on the hearth, which owed its excellence not only to the fact of its being hearth baked but to the rye flour being ground in an old mill in a nearby town.”

I always use some caution when following recipes this old since safety precautions and dietary recommendations have changed significantly in the last 100 years. I recommend being familiar with current FDA and USDA food safety guidelines! But this particular recipe is safe and straightforward.

Note: “Frau Schmidt” must have had quite a sweet tooth. Feel free to adjust the amount of sugar, or use a different sweetener! If you do not have an “agate pudding dish,” you can simply prepare this on the stove top in a large skillet. 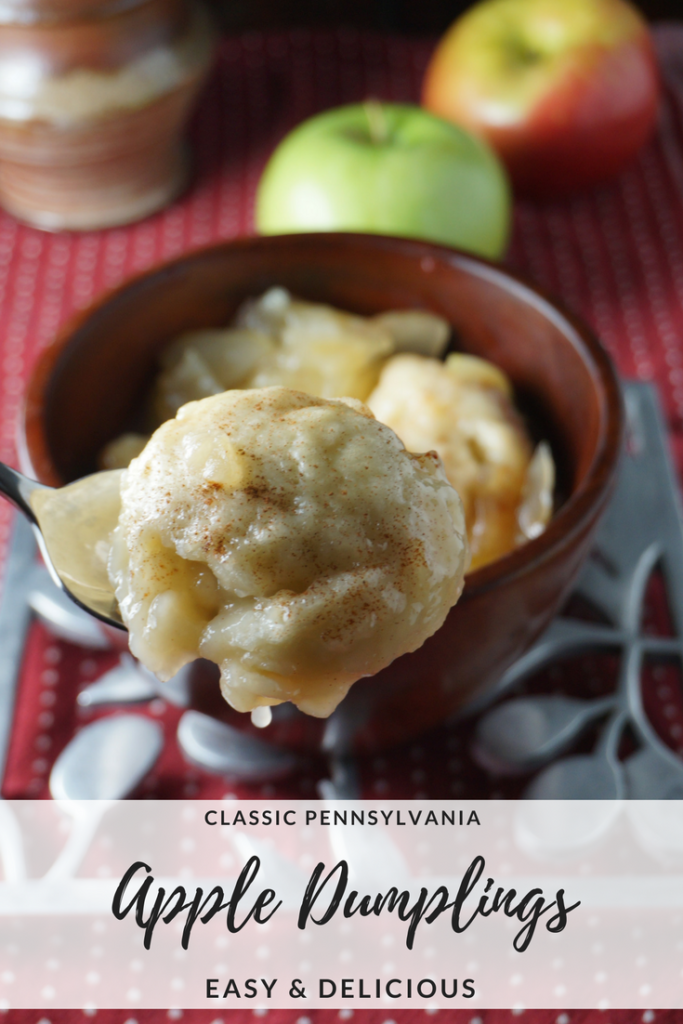