One of the greatest joys I have as a parent is seeing the appreciation I have for food passing to our four year old daughter. It has taught her patience, problem solving, and that it is okay to make a mistake. This recipe was born out of one such “mistake.”

My daughter was helping me make some pumpkin bread for an upcoming gift exchange. We had successfully navigated measuring, combining, and whisking the dry ingredients, which can be quite a feat to overcome with a youngster.

The wet ingredients were whisked together and ready to go into the bowl. After what felt like an eternity of transferring the dry ingredients into the bowl by the spoonful, it was time to turn on the mixer. My daughter proudly toggled on the power and set it to 7! A blizzard of flour erupted through our corner of the kitchen in the blink of an eye. We laughed, and after a mini lesson on cleaning up after ourselves, the tins went into the oven to bake.

It wasn’t until the bake was finished and I set out to lift the loaves from the tins that I realized my mistake. I had never sprayed the tins with cooking spray. Our loaves were beautifully cooked and very content to stay in their warm beds. All the trickery I tried could not release the pumpkin bread from the tins and I lost the bottom section from each loaf to the error I had committed.

I found myself in a bit of a pickle. That evening I had invited people over after our church’s Christmas Eve service to celebrate my wife’s birthday. I knew I didn’t have enough time to make another set of pumpkin bread and a dessert. So I created a trifle out of the pumpkin bread, added a bit of bourbon to homemade whipped cream, and added salted pepitas and pomegranate seeds for texture and brightness.

What originated in a mistake ended up being one of the easiest desserts I’ve ever made. The dessert celebrates the warm, cozy nature of the holiday season with a beautifully spiced base, has textural excitement that is often provided by berries in a traditional trifle, and I have to say, it was a huge hit at the party! 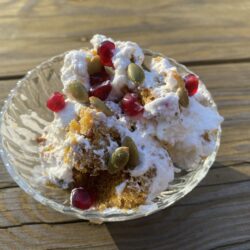 For the Pumpkin Bread

For the whipped cream

If you want a more stabilized whipped cream, you can add 6 Tbsp (114g) piping gel or 1 Tbsp of corn starch. Add either of these in with the powdered sugar.

Note, if using a smaller bowl, or only using one of the loaves of pumpkin bread, cut the whipped cream in half.