By Rebecca Talbot on March 27, 2017 in Farm Market Products, Vendors

Canada. Vermont. New York. If someone says “maple syrup,” these are the places that come to mind, right? Surely not Pennsylvania?

After talking with Linda Neal, Sugar House Manager for Patterson Farms in Sabinsville, PA—roughly ten miles from the New York border—I will now be adding Pennsylvania to my mental list of major maple syrup producers. After all, Patterson Farms is one of the top ten maple syrup producers in the United States! Although Vermont does produce the most maple syrup, a total of twenty-four states including Ohio, New Jersey, and Virginia also tap their trees for the sweet, natural treat. Many of these states still have untapped potential, though. In Pennsylvania, the state is covered with maple trees, but only five percent of its maple syrup potential is currently put to use, says Linda.

“Every state thinks their [syrup] is the best,” laughs Gary Stockin, who distributes Patterson Farms’ maple syrup to Weaver’s Orchard. Linda Neal agrees. Each state’s syrup tastes different, she says, because there are different maple trees, different soil, and different growing seasons. Pennsylvania maple syrup, she says, has a medium or mild flavor and a “caramely taste you just love.”

For those who find themselves picturing the big maple leaf on the Canadian flag and strongly associate maple syrup with Canada, Linda shares the story of one year when Canada’s one million gallon national reserve of maple syrup got a bit low and Patterson shipped two tractor trailers full of maple syrup to our neighbors up north. Patterson Farms was happy to help, but the irony was not lost on them!

The Distributor: Stockin’s Apiaries of Strasburg

Gary Stockin of Stockin’s Apiaries is not only the beekeeper who brings bees to pollinate Weaver’s fruit trees. And he’s not just the producer of our own raw Orchard Blossom honey. He’s also the distributor who brings Patterson’s amazing maple syrup from the edge of Pennsylvania to Weaver’s Orchard.

Gary grew up in one of those classic maple syrup states—New York—and fondly remembers the days when his family would tap the trees and he would stay up late into the night, feeding wood into the fire to boil down the sap into syrup.

He used to produce some maple syrup of his own, and now, as a fulltime beekeeper, he still wants to offer his customers maple syrup since people often think of honey and maple syrup together. So, he turns to producers like Patterson Farms and supplies their maple syrup to customers and farm stores like Weaver’s!

The Producers: Patterson Farms of Sabinsville

Up at Patterson Farms right now, it’s still maple syrup season, which runs from the end of January through early April. This year, they started early—January 16—and made their first syrup on January 19. 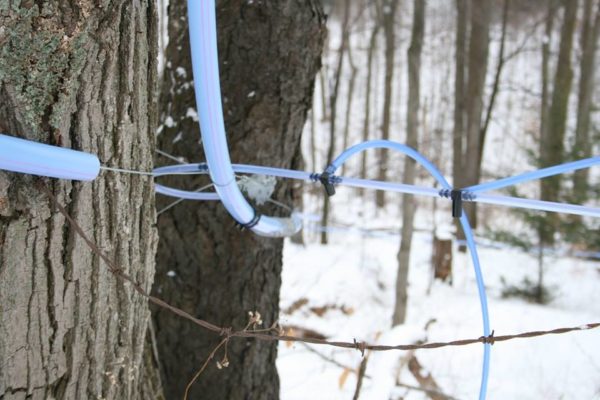 Each year, Sugar Master Richard Patterson and his team begin resetting their 86,000 taps when the nights are still freezing but the daytime temperatures reach about 40 degrees. 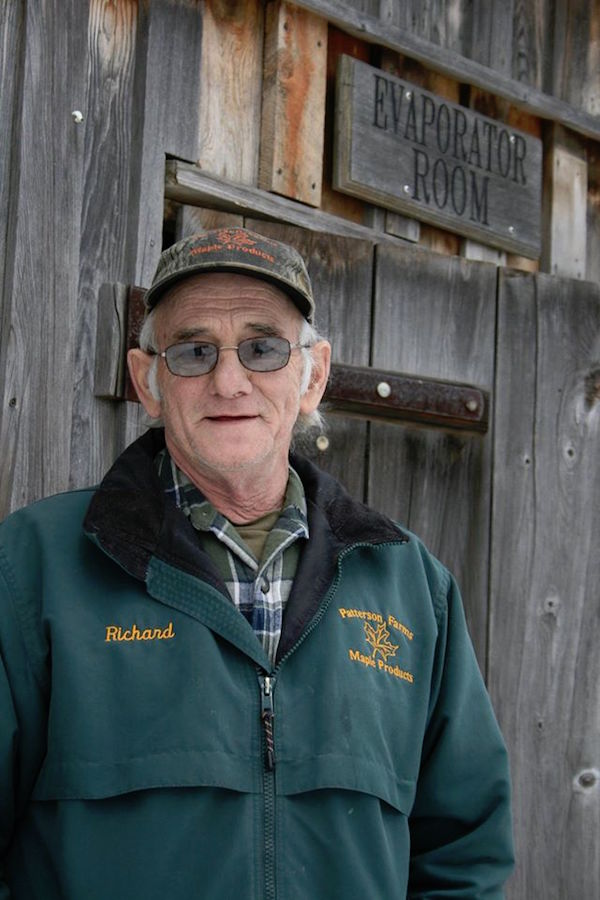 To create a tap, they drill a very small hole in the tree—a new one each year to give the tree time to heal. With much smaller holes than there used to be, it only takes six months for the tree to heal over, versus the two years it used to take. “Each generation learns a little better,” says Linda Neal, who has worked at Patterson Farms for 26 years.

These days, on this third generation farm, Richard Patterson uses high-tech equipment, including an enclosed system with tubes. The tubes feed into one machine, which takes water out of the sap before it boils. This is a helpful first step since the sap that drains out of the taps, straight from the tree, is only 2% sugar. The rest is water, and it takes 43 gallons of sap to make one gallon of syrup. With the help of this machine, the boiling process does not take as long as it used to in the days when sugar masters used boiling alone. 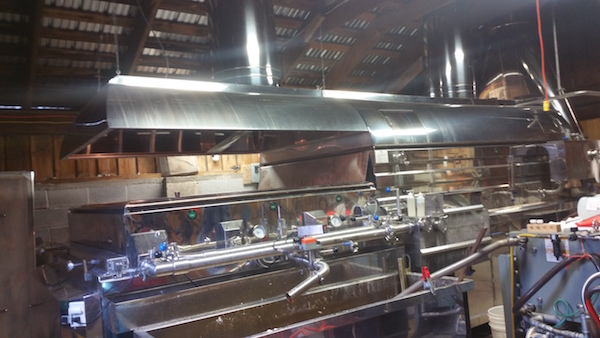 The evaporator Patterson Farms uses to boil the sap down in the final stage. Photo courtesy of Gary Stockin

After the syrup is boiled, adds Gary, it gets filtered to remove granular minerals, known as “sugar sand,” that can give maple syrup a cloudy appearance or settle to the bottom as sediment.

At the beginning of the season, the syrup flavors are not as complex, and are best for maple cream, maple candy, and maple sugar. Later in the season, as the trees change, the syrup becomes darker and more flavorful and is sold as straight syrup. Later on, when the trees bud, they get what Linda calls a “funny, buddy flavor” and Patterson knows it’s time to stop tapping the trees for the year. The maple with this flavor can still be used, and they sell it for maple extract and sweeteners. “Nothing’s wasted,” Linda explains.

The Health Benefits of Maple Syrup

Since maple syrup is minimally processed—simply concentrated and filtered—it can contain small amounts of calcium, magnesium, potassium, iron and other minerals. Refined sugars, on the other hand, contain no vitamins or minerals. Any nutrients that occurred in the sugar cane have been processed out.

Maple syrup is also notable for what it doesn’t have. Maple syrup is safe for people with corn allergies, and Patterson’s does not use any packaging made from corn. Gary Stockin, too, uses glass jars rather than plastic containers can sometimes be made with corn.

It turns out that maple syrup has been “helpful for people in many different predicaments,” says Linda. Diabetics, she says, can use moderate amounts of maple syrup, as it does not spike their blood sugar the way that white sugar does. Cancer patients can use maple candy to alleviate nausea after treatments. Patterson Farms has found out about many of the health benefits by coincidence, as customers and family members seek out the healthier sweetener, and they are so glad maple products help keep life sweet.

It’s easy to switch to a better sweetener—any recipe that calls for refined sugar can be made with maple sugar or maple syrup instead! March is a great month to make the switch—it’s Maple Month! Start with this delicious recipe for Maple Thai Iced Tea!