By Ed Weaver on March 9, 2017 in Farming Practices/Organics, President’s Letter

March 4th Freeze: An Update on Our Crops

Many customers have expressed concern about the cold temperatures on the night of March 4th into the morning of the 5th, and are asking about the impact on the fruit buds. We appreciate all who have been concerned and have offered prayers for protection of our crops, and we wanted to let you know about the freeze event and the impact that such events can have on crops.

In the days leading up to Sunday’s freeze, we experienced record high temperatures for our area, as temperatures soared to the mid-70s. Sustained high temperatures like these tend to advance the growth stage of fruit trees and bushes. Our fruit was about 2-3 weeks ahead of the growth we typically see at this time of year. Unfortunately, the further advanced the growth stage, the more damage cold temperatures can do to the fruit. (This chart provides a helpful guide, but keep in mind that there are numerous factors that can cause varying results.)

On March 4th, temperatures plummeted to 8-11 degrees, with 6 to 8 mph winds. When this happens, the damage is not always apparent until a few days later, so we are currently evaluating the buds, looking for signs of discoloration. Typically, the buds show some discoloration at first, and then brown further as time goes on. In the case of Sunday’s event, it may take longer for symptoms of damage to show up since it did not get too warm immediately afterward. 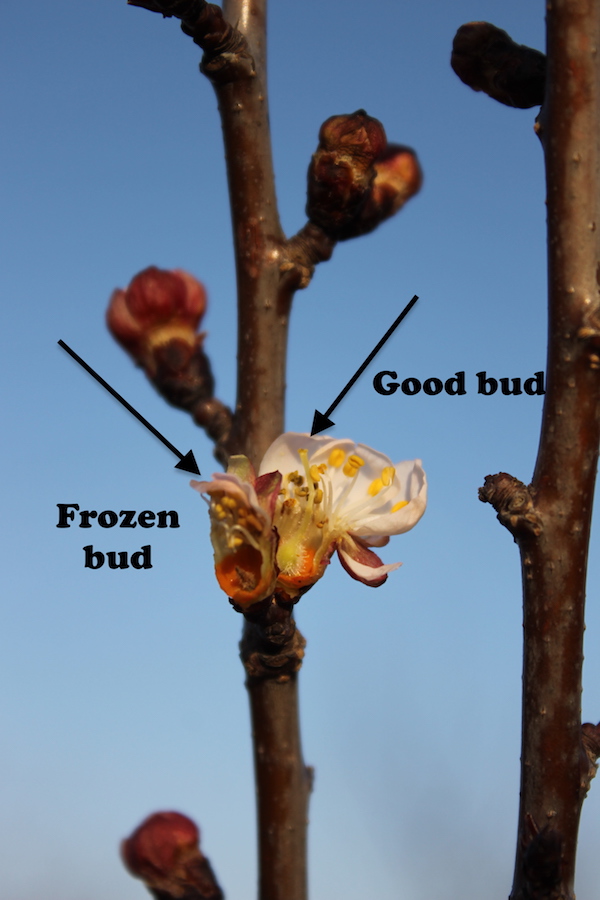 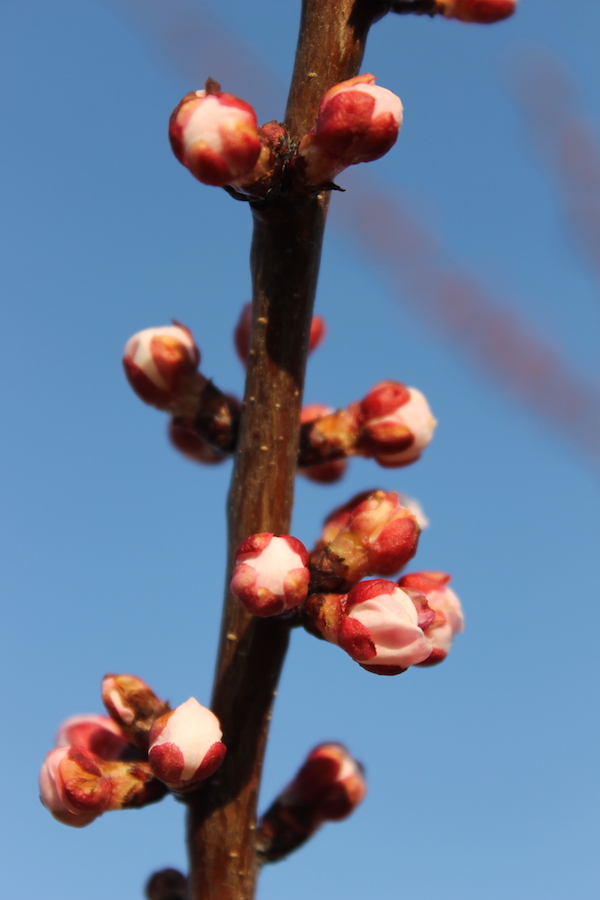 We still have six to eight more week of winter/early spring, so what happens in these next few weeks will be important in determining how our crops thrive. If the weather stays cooler, this will be better for the fruit, as the growth stage will not continue to advance as quickly.

We did have a similar situation in 2012, where the weather dipped down when the buds were at an advanced stage, and that turned out to be one of our better years. So we are still hopeful that 2017 has a good potential.

Buds begin to develop during the summer, and then they go dormant and must wait until spring to bloom. It is harder for crops to be damaged while they are dormant, and if they can survive the early dormancy period without getting damaged, they tend to be much hardier. 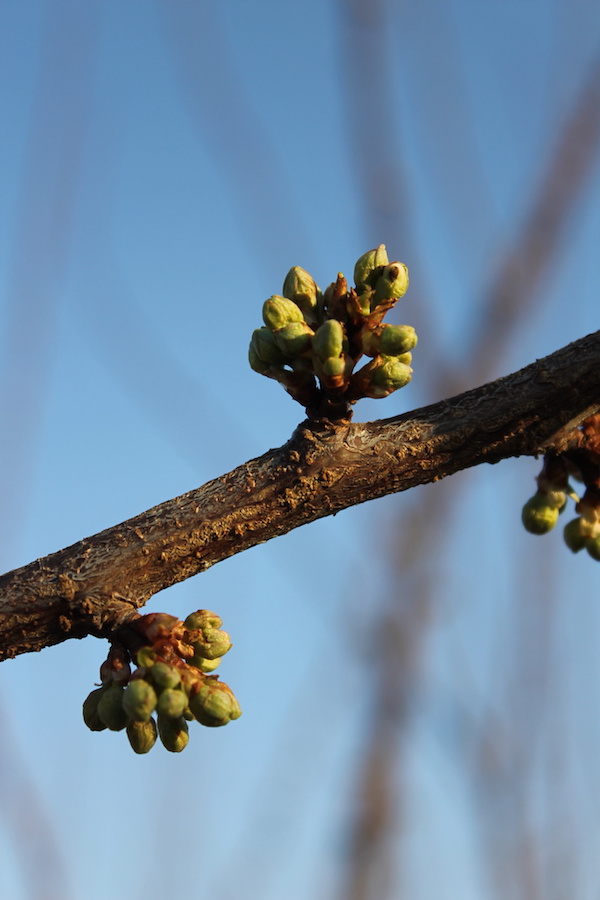 Closer to spring, the buds start to swell and move toward bloom. The sap begins to flow, the moisture content goes up—and all those things make the buds more vulnerable. In fact, some fruit is less vulnerable right after bloom than immediately beforehand. Peaches, for instance, can survive cold better when they have green fruit than when they are just blooming.

What happened on Sunday night is considered a freeze, rather than a frost. A freeze tends to happen around this time of year, and is accompanied by winds.

Frosts generally occur when the weather is very calm and cold air settles into low areas. This can be dangerous to the crops that are in low areas. Frosts tend to happen later in the spring.

What Farmers Can Do

Over the coming weeks, you may see us employ some of the following methods to minimize further damage to our crops. Most of these methods would not have been effective for the conditions we saw on March 4th. They do not work well when temperatures reach the teens or colder, or when winds reach 5-10 mph or higher. But they may be effective if we have any other freeze or frost events when it does not get so cold or windy.

High tunnels—plastic coverings much like greenhouses without doors— can be very helpful as we get closer to spring. In early March, however, we may still see snow in our area, and a heavy snow load can destroy the high tunnels. So we will try to wait a few more weeks before getting our high tunnels ready.

Many people would not guess this, but ice can actually release the latent heat in a plant, so farmers will sometimes use sprinklers to help the trees or plants warm up.

Sprinklers that are positioned over the trees can be effective, but they can be quite risky and can make damage worse if conditions are not right. They also bring the risk of creating too much ice, weighing the tree down and causing limbs to snap. We prefer to use under tree micro sprinklers, which help to raise the air temperature a few degrees, but they can’t be used in high wind or extreme cold.

We will evaluate the risks and may use sprinklers, as we did last year, if they become necessary and if they will be helpful given the weather conditions.

When colder temperatures settle into a low-lying area, fans can help the air circulate better so that there is an influx of warmer air.

We are looking forward to a good harvest season in 2017. We pray for good weather in the crucial upcoming 6-8 weeks. We are grateful for the concern our community has shown for our crop, and we look forward to sharing a fruitful harvest with you come summertime.

View all posts by Ed Weaver →