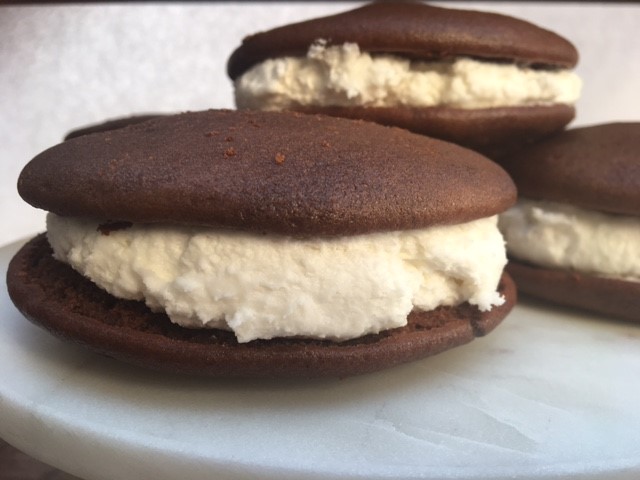 Before I became one of them, (a Weaver I mean!) I found it to be extremely entertaining and surprising to hear the light hearted banter that most certainly would accompany any family meal:
“This is good— but it could use twice the vanilla!”
(I quadrupled the vanilla in the recipe already?!?!)
“The meat is a bit overdone, but I love the sauce!”
(Just make sure it’s not mooing!)
“Try adding more cayenne!”
(Lord, help me– I’m sweating already!)
“A tablespoon of pepper should do the trick!
(Ick! I hate pepper! You’re ruining it!)

So it should be no surprise, that when our baker Heidi took on the challenge of developing our own shoofly whoopie pie recipe—the whoopie sure began to fly!

I believe she walked around for a week carrying her numbered samples of the specimen and getting all our opinions (poor Heidi!):

“I like number four– I think— but it might have too much molasses, did you ever think of using table syrup instead?” (Followed by an educational moment when Mrs. E. Weaver explains to baker Heidi the benefit of table syrup over black strap molasses).

“Hmm! No! Yes! No! Okay! Number three was probably my favorite– can I taste that again?” (After the fourth sample, fingers are getting smacked).

“The icing is good in this one, but it should probably taste more like a shoo than a fly.” (say what?!?!)

“Now I can’t remember which one I liked, mind if I have a glass of milk first to clear my taste buds?” (okay Mr. Weaver, I think you’ve had enough!)

Alas, this is how our world (okay maybe state!) famous shoofly whoopie pie recipe was developed. And it sure is delicious! Just the thought of the gooey molasses cookie with rich cream filling– that exhibits a hint of shoofly pie flavor– is enough send me running out the office door and up to the bakery to snitch one from the rack! But don’t take my word for it—come on over and try one for yourself! (And be sure to take a moment to let baker Heidi know what you think of this scrumptious treat… she’s used to our comments by now!)

From our Orchard to you—
Mrs. E. Weaver signing out… (Just wait until she starts sampling those pies at Taste of Weavers!)