How can you make dinner and amuse the kids at the same time—especially on a snowy day? Why not make Stone Soup? There are lots of variations on this fable. You can check the book out of the library, tell the tale in your own words or print out the script below.

Stone Soup is a wonderful lesson on sharing.  Everyone in the story has a little bit of food, but they’ve hidden it away to keep it for themselves. Then a hungry visitor comes along. He knocks on every door, begging for a scrap of food. Each person turns him away. They don’t have enough to feed their own families, let alone a stranger. But this clever visitor devises a plan to fill his own belly, while bringing the village together for a wonderful feast.

To act out this story with your children, prepare the items you want to put in your “stone soup.” Pour 4 cups of water into the pot, and have the ingredients ready when you call the children into the kitchen to help you make soup from a stone.

Simmer the soup on the stove top for 3 hours, or in the crock pot on low for 6 hours. You can put in other ingredients like peas, green beans, corn, mushrooms, etc.  A tablespoon of Bragg’s apple cider vinegar (available at Weaver’s) also adds flavor.

If you’d like to act out the story, feel free to print my version (PDF or DOC). Then gather the children in the kitchen and assign parts to read. They can each read several parts—or you can invite the whole neighborhood!
To keep the kids busy for a little while as the soup simmers, you might want to make our family’s Favorite Buttermilk Biscuits. You can prepare them ahead of time, but put them in the oven just before serving dinner. They are best when they’re piping hot. 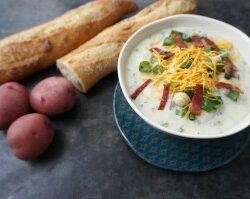 Stone Soup Script
Narrator: Have you ever made soup from a stone?

Narrator: Well, let me take you back in time, and we’ll find out how stone soup was invented.  A long, long time ago, there was a little village in Pennsylvania. This little village was having the coldest winter in history, and the snow just wouldn’t stop coming. The villagers wrapped themselves in blankets and huddled by their fireplaces, waiting for spring to come.  Everyone was hungry, and everyone was running low on food. Then one blustery day, a visitor came to town. He was cold and hungry too. He began knocking on doors.

Visitor (knocking on first door): Do you have a scrap of food for a hungry traveler?

Grumpy man: No! Go away! I hardly have enough for my own family! (slams door)

Visitor (knocking on second door): Do you have a scrap of food for a hungry traveler?

Tired mother: No I don’t!  Can’t you see my own children are hungry? (slams door)

Visitor (knocking on third door): Do you have a scrap of food for a hungry traveler?

Suspicious woman: No, and don’t you try breaking in here in the middle of the night! My vicious dog will bite you! (Dog growls and suspicious woman slams door)

Visitor (knocking on fourth door): Do you have a scrap of food for a hungry traveler?

Ragged father: No, no one here has any food. Why don’t you try the next village?

Visitor: Well, I guess I’ll just have to make soup from a stone. I brought my iron kettle and my ladle. Now all I need to do is make a fire. I’ll scoop up some snow for the broth. . . and look! Here’s a stone! (He picks up the potato)

Narrator: The children put their coats on and ran outside to watch the visitor make soup from a stone.

Visitor: (putting the potato in a pot of water. Turn on the burner or crock pot. He tastes the soup.) Ah, it’s very good, very good. But it needs a few carrots.

Children: We have carrots! (They run inside to get them, then drop them into the soup.)

Visitor: Ah yes, very good. (Tasting soup) It would be even better with a little celery.
Tired Mother (peeking out of door with her children): We have a little celery! (She pours it into the pot.)

Narrator: The villagers came out of their homes one by one, and stood around the boiling pot of soup.

Visitor: (tasting soup) Mmm, delicious. If only we could add a little seasoning.

Grumpy man: I have a little seasoning in my cupboard. I’ll go find it. (He drops in 3 bouillon cubes.)

Visitor:  Heavenly! A few scraps of meat would make it absolutely perfect.

Suspicious woman: I have some scraps of meat! I was going to share it with my vicious dog, but. . . I’ll share it with you instead. (Dog growls) It’s okay, Mugsy, I’ll cut the fat off for you. (Dog yips happily. She drops the meat cubes into the pot. )

Narrator: Then the villagers began running into their houses and back again, each one bringing something to add to the soup.

Tired mother: I found some tomatoes!

Ragged father: We have some cabbage!

Narrator: And so they kept adding and stirring and letting the soup simmer until it was just perfect.

Visitor: Well, what do you know! I think there’s enough stone soup here for all of us! We’ll just let it simmer a little longer.

Ragged father: Why don’t you come into our warm house and sit by the fire? You can tell us all about your travels. Everyone come in! And when the soup’s ready, we’ll have a feast!

Narrator: And so the whole village gathered in the cozy little house. They listened with amazement as the visitor told of travels to faraway lands. And when the soup was ready, everyone had plenty to eat. There was even some left over for the next day!  And for years and years and years, the villagers told the story of the visitor who came to town and made soup from a stone.