For those whose eyebrows twist a bit as the word “kombucha” is said, Jeremy Sayer, the owner and head brewer of Renewal Kombucha, offers a definition.

Weaver’s Orchard currently has two taps of this kombucha for use in the market, and flavors are switched as kegs run out, which can sometimes be a few times a week, notes farm market manager Dwayne Musser.

Kombucha fill-up options include kombucha by the glass and reusable 64-ounce growlers and 32-ounce growlettes (customers get discounts on growler/growlette refills). 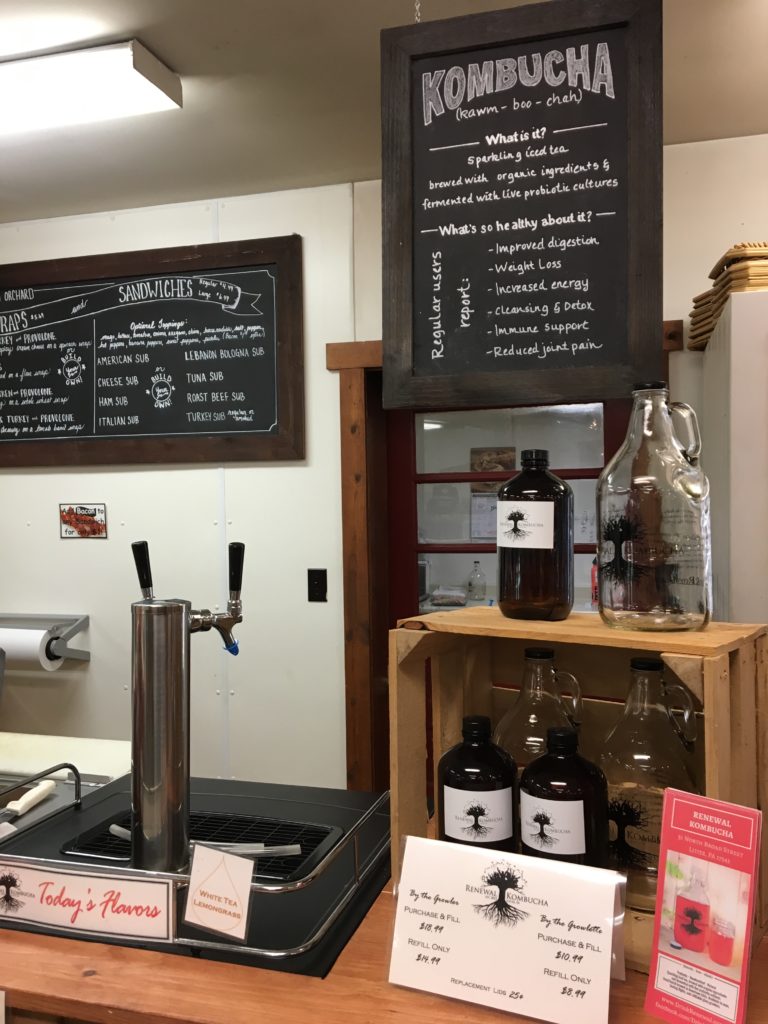 Other than actual tea leaves brewed into kombucha, yerba mate and cacao nibs are occasionally used and have caffeine, but the amount is usually less than a cup of typical coffee or hot tea.

The SCOBY, or symbiotic culture of bacteria and yeast, is often an acronym used in conversations about kombucha.

“The SCOBY is what turns tea into kombucha,” Jeremy says. “A very simplified explanation is that as kombucha is fermenting, the yeast in the culture eats sugars in the tea, and turns it into ethanol and carbon dioxide, and the bacteria in the culture eats the ethanol and turns it into beneficial acids. During the fermentation process, the probiotic bacteria also propagate and blend with the tea to create the finished product.”

Since he knows a lot about kombucha, Jeremy elaborates more in SCOBY-speak.

“The SCOBY is a pretty incredible organism,” he says. “When kombucha is brewed correctly, the SCOBY will form a new ‘baby’ layer with each batch. As these layers get thicker and healthier over time, they can be separated to be used in multiple batches of kombucha. When I started brewing, I grew my first SCOBY from a bottle of raw organic kombucha. Now, several years later, all of the SCOBYs which we use can be traced back to that first little culture.”

In each batch of kombucha, Jeremy and his team include four essential ingredients: water, sugar as evaporated cane juice for the yeast to eat, SCOBY and some form of tea or herb which contains tannins.

“Tannins are a molecule found in tea and many other herbs, fruits, nuts, etc. and have a bitter taste,” Jeremy says. “Tannins have a calming effect, which might explain why people don’t usually get the jitters from tea in the same way they might from drinking coffee. There’s some evidence that tannins help to lower cholesterol, lower blood pressure and boost the immune system.”

The Benefits of Probiotics

Probiotics as live culture are another part of the healthy appeal of kombucha.

“Probiotics are basically bacteria which are beneficial to the body and can help to combat the effects of harmful microbes which work their way into our bodies in various ways,” Jeremy explains. “Our guts contain hundreds of trillions of microbes, and when they get out of whack, they can affect everything from our energy levels to our mental health to how our immune systems function. Probiotics help make our guts into more happy and peaceful places.”

If you feel like you have heard more about probiotics lately, Jeremy has insights into why this is the case.

“From my understanding, the recent attention on probiotic bacteria is due to advancements in both DNA research and the development of more sophisticated scientific instruments which can differentiate between different gut bacteria on a molecular level, which allows study of the bacteria present in healthy versus unhealthy people,” he says.

“We love experimenting with different flavors,” Jeremy says. “Some of the more unique ingredients which have gone into some of our kombucha flavors include raspberry leaf; sassafras; fennel; chili peppers; butterfly pea flower; and juniper berries.”

Then there’s taste to consider, still.

“Kombucha flavors can be as varied as flavors of coffee or wine,” he adds. “Some are more tangy, floral, sweet or savory than others, and this can vary from brewer to brewer using similar ingredients. Most kombucha will have a mildly acidic flavor which is somewhat reminiscent of the flavor of apple cider vinegar. That acidic character is sometimes a very small part of the overall flavor profile of a kombucha, or it can be more accentuated. My advice is—if you try one kind of kombucha and don’t like it, don’t give up! Try a different flavor, or if you’re at our taproom, tell us what sort of flavors you tend to like, and let us make a recommendation.”

Renewal Kombucha’s flagship flavors (Hibiscus Mint Green Tea, White Tea with Lemongrass and Rose Hips and Purple Butterfly) are quite popular, Musser says. In the past, seasonal flavors like Autumn Spice and Cran-Apple sold well, and most recently, a spring persuasion called Fruit ‘n’ Flower is especially liked by shoppers.

“There are some customers who drink it religiously and are of getting a few refills a week,” Musser adds.

“Weaver’s Orchard is a great family-owned business with roots in the local community,” Jeremy reflects. “They care about quality, sustainability and supporting local businesses. That lines right up with our values. I think that people come to Weaver’s Orchard expecting to find something special, beyond what they might see at their local grocery or big-box store. Being a small operation, we choose closely who we work with and where we stock our product. When we found out that Weaver’s was interested in partnering with us, it was a no-brainer.”