By Ed Weaver on April 21, 2016 in Farming Practices/Organics, Featured, Life on the Farm, Pick-Your-Own, President’s Letter

On Wednesday, April 20, Weaver’s Orchard made a big change. In the course of about four hours, a team of nine people from Countryside Farm and Nursery in Virginia helped us switch 1,000 apple and pear trees from one variety to another. 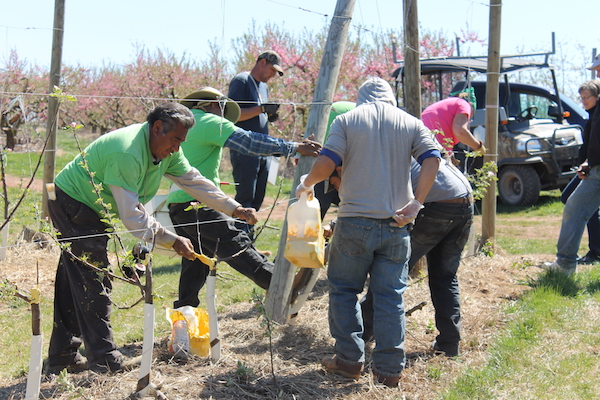 It’s the first time we have done this, and it was an amazing process.

If an orchard has trees in the ground but decides that they no longer want as much of a certain variety, they can switch those existing trees over to another variety. We decided to switch some of our Crispin apple trees over to Blushing Gold and Crimson varieties– Crimson Topaz, Crimson Crisp and Crimson Gold. We will still keep approximately 300 Crispin trees (also known as “Mutsu”) for those who love this greenish-yellow apple known for its sharply sweet flavor. We are also excited to expand our Crimson offerings. 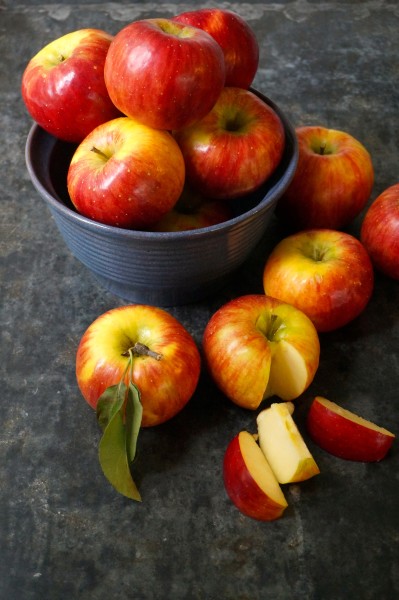 We will also be switching a number of pear trees to a new variety called “Gem,” which tastes similar to Bartlett but is more blight-resistant.

Every tasty apple you eat comes to you through the ancient process of grafting. Orchards rely on this process, rather than simply starting an apple tree from seed, because apple seeds do not carry the particular genetic information that determines what variety will grow. If you planted a Fuji apple seed, you would have no guarantee that a Fuji apple tree would grow! Orchards and nurseries use the process of grafting whenever they raise any kind of pome fruit trees like apple, pear or quince trees or stone fruit trees like peach, cherry or plum trees.

Each apple tree we have planted at Weaver’s begins as “root stock” that a nursery has started for us. The nursery plants a small cutting, the size of a small finger, and lets it grow for one year. In late summer, they then graft a bud from a specific variety onto the root stock, and then those grafted trees come to Weaver’s.

Because it is the graft, not the seed, that determines the variety of the tree, we were able to change Crispin to Crimson!

Yesterday the team selected two- to four-year-old trees and cut them down to about two feet high. 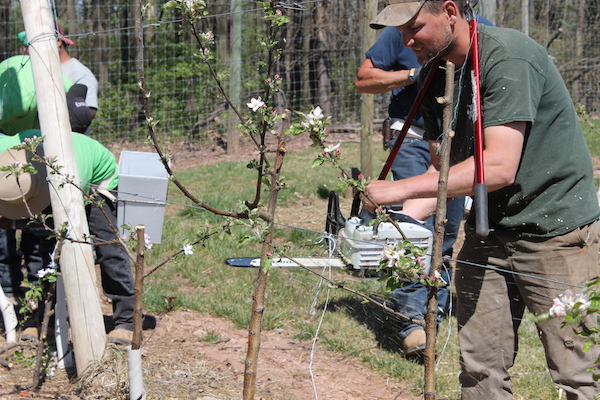 Preparing to cut the root stock. 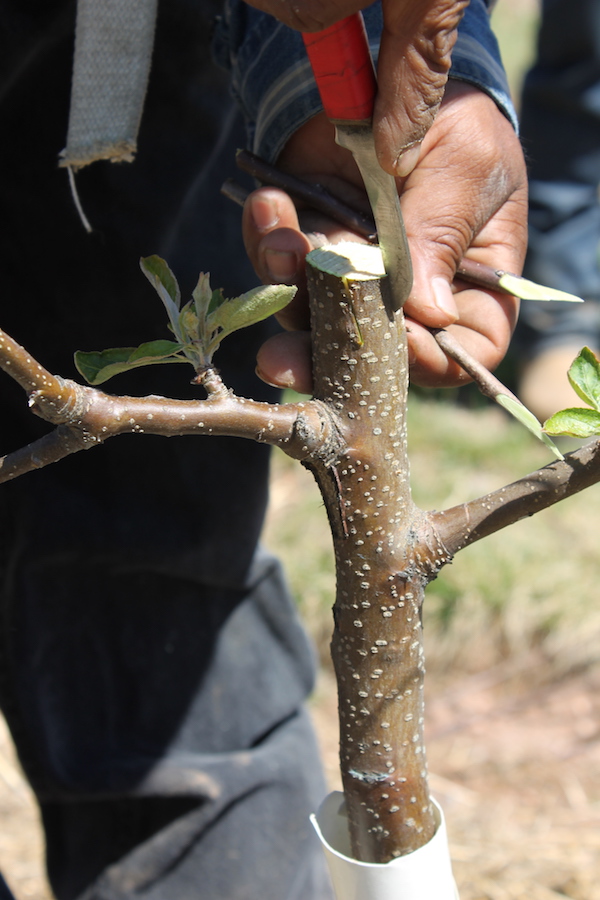 After this, they spread wax on top of the old tree, and on top of the end of the scion wood. Both of the cuts that have been made must be sealed to prevent drying and keep out bacteria. We will continue to check on these thousand trees to make sure no holes develop in the wax, and to seal them up if we find any. 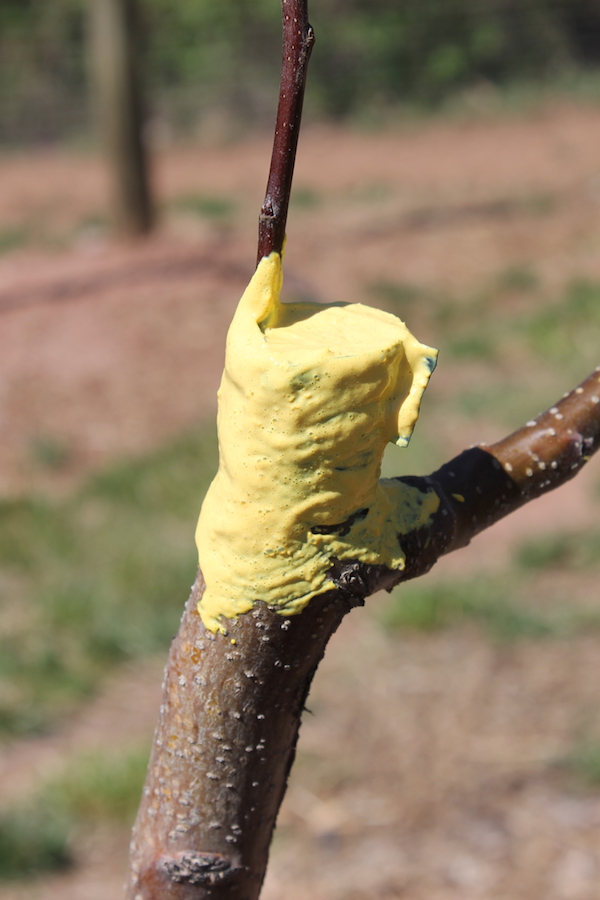 One each tree, the team left at least one small tree limb intact as a “valve.” This allows some of the tree’s energy and nutrients to continue flowing to this older branch. If they did not leave this “valve,” too many nutrients could flow to the scion wood–more than it would be able to take. 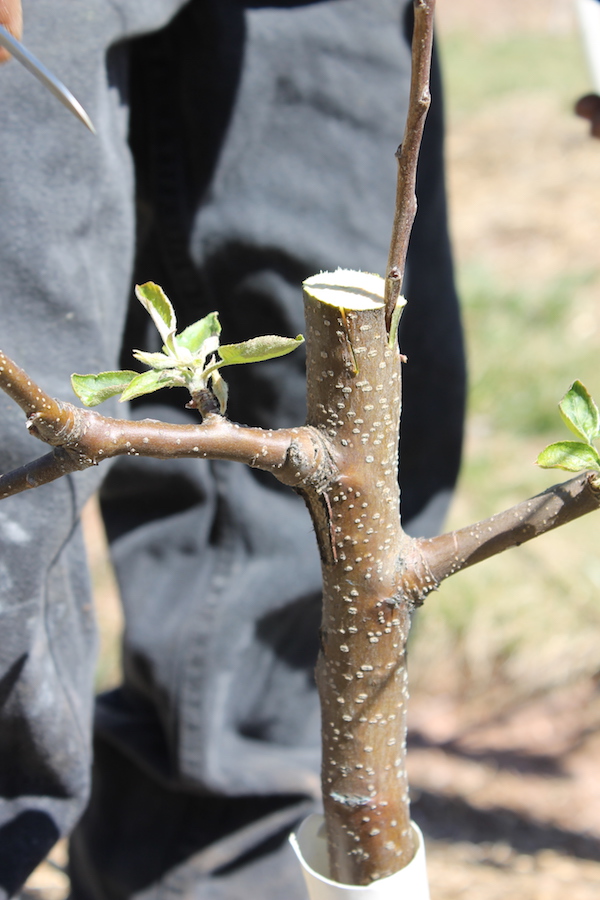 Where the sap flows and how quickly it flows are both important considerations when grafting. Spring is the time to graft trees because the sap is just starting to flow, which means the scion wood and the root stock bond more easily and the cuts heal more quickly.

Within two to three years, these trees will have caught up with the others in their block. The year after next, the Crimson varieties, Blushing Gold apples and Gem pears will be ready for pick-your-own!

And while we are waiting for that day, we will leave you with two fruit facts to think about. First, did you know that you can graft up to four varieties of apples onto the same tree? You could find a tree that produced Honeycrisp, Pink Lady®, Fuji and Autumn Crisp! Which four varieties would you choose?

Second, and even more surprising, did you know that you could even graft different kinds of fruit onto the same tree? You could find a peach-nectarine-plum tree, or a pear-apple-quince tree! As long as the fruits were in the same family (such as stone fruit or pome fruit), this kind of tree would be possible.

View all posts by Ed Weaver →

The April Freeze: An Update on Our Crops
5+ Years of Cooking Education